A long time ago, when I was still a teenager, I was sitting at table with several hams, many years my senior, listening to one of them talk about how his wife hates his hobby, and all the antennas, and the time he spends in his shack. That day, I vowed to marry someone who understood what amateur radio means to me, or at least showed the virtue of tolerance in spades. I’ve been lucky enough to find both. 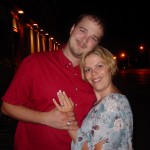 Cassandra and I met in the winter of 2004, and with all the time we were spending together, she very quickly started to wonder what all of the weird equipment in my apartment and my car was. once she realized how important the hobby was to me, she started to come to local club meetings, volunteered At ARES events, and even worked a few contests with me. It wasn’t very long before she began to study for her license, and later in 2004, she became VA3MEW.

We got married on July 15, 2006, and moved into our first house 1.5 months later. Since then, she has showed the patience of Ghandi with my hobby. I mean, I owned a home. What does a ham do when he owns a home? ANTENNAS!! She knew it was coming. She wasn’t particularly happy about it, but she loves me and up went my first real tower and my first antennas that weren’t random wires. 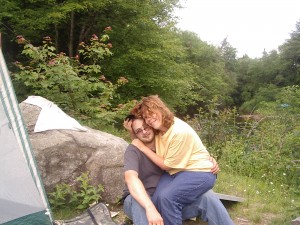 Since then, I’ve pushed the envelope several (several) times and she’s put her foot down. No more new antennas. So I’m stuck with what I’ve got:

Well, I suppose I’ll have to deal with what I’ve got. Maybe she’ll let me replace the MA-5B with a SteppIR?

Better not push my luck.