Automatic Link Establishment, or ALE for short, has become a worldwide standard for initiating HF communications between two or more points. In short, you program a radio with the channels you have access to, and that radio scans and “sounds” periodically establishing knowledge of other radios similarly scanning and sounding to create a network. At this point, an operator need simply initiate a call and that radio will call on several frequencies until the recipient’s radio establishes a stable link, and then 2-way communication commences, whether it be phone or digital.

Does it sound like it takes all the fun out of HF communications? Probably. But it seems that ALE was brought about to make it easier for non-Amateurs (i.e. Goverments, Military, NGOs, etc..) to communicate via HF – in a sense, ALE takes away the requirement to know about such things as atmospheric conditions, solar conditions, what bands are good at different times of day, etc… An operator simply needs to be trained on their particular transceiver and the antennas available to them.

Now, take ALE and put it in the hands of an Amateur Radio operator, and you get HFLink: a network of stations capable of instantaneous linking over vast distances, on different bands, using several modes, with pilot stations that operate 24/7. In addition, those pilot stations allow for the passing of traffic via Winlink. There are frequencies that have been reserved and set aside by the IARU, and even sanctioned in the US by the FCC, for the establishment of this network. In the US, HFLink has even taken part in an exercise to test the interoperability of Amateur Radio operators using ALE and the US Federal Emergency Management Agency (FEMA).

Radios from the “Big 3” that come with built-in ALE functionality include the Icom F8100, the Yaesu VX-1700 and the Kenwood TK-90. You can also find ALE functionality built-in to Motorola Micom units, Harris Radio units, Codan radios, almost any manufacturer that manufactures and sells HF equipment to commercial, governmental or military users.

That said, most of us don’t have radios with built-in ALE functionality. However, Steve Hajducek, N2CKH, maintains a piece of software called PC-ALE, which allows us to use our computers and a sound-card interface as an ALE controller based on the standards used worldwide. (He also maintains a piece of software called MARS-ALE which is used by the Army and Air Force Military Auxiliary Radio Services in the US, and the Canadian Forces Affiliate Radio System here in Canada to integrate with the HF radios used by each country’s military.) If you have a CAT-capable transceiver with a sound-card interface, you can become a member of the HFLink Network.

WARNING: The software will look a bit confusing. That’s because it’s been written and laid out based on the commonly accepted ALE standards, and it’s menu structure is also named as such. It takes a bit of reading and some patience to setup properly, but is well worth the effort. You can join the HFLink Yahoo Group for advice and technical support. 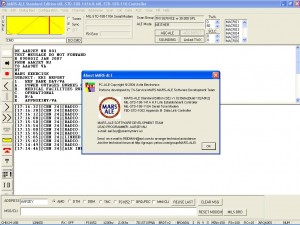 At my home QTH, I operate a dedicated ALE station consisting of a Kenwood TS-480HX, an LDG KT-100 Autotuner, a Tigertronics Signalink SL-USB Sound Card Interface, and a home-brew random-wire antenna, approx. 80′ long, with the feed-point at 40′ high into a 9:1 magnetic longwire balun, down-sloping at about 35 degrees. I use MARS-ALE rather than PC-ALE since I am a licensed member of CFARS, which grants me access to that piece of software. The Kenwood TS-480HX has a built-in serial port capable of 115.2KB/s communications, which makes controlling the radio quite simple. However, even though the Signalink interfaces use VOX to control PTT, I’ve pulled the PTT jumper from the unit altogether and allow MARS-ALE to key the radio via CAT commands. VOX keying is strongly discouraged when using ALE due to the high speed keying that the standard requires. I regularly scan 16 channels at a rate of 2 channels per second, consisting of CFARS assignments and the accepted HFLink Data Network (HFN) Frequencies. I’m trying to tweak things so that I can scan at a higher rate (5ch/s) but I find that I miss soundings at that speed.

HF communications is considered a tertiary form of emergency communications, with hard-line telecom or digital links being primary, and satellite communications being secondary. Even using ALE, we all know how finicky HF can be, and how our sun can cause a worldwide HF blackout at a whim. Still HF is, and will always be, a viable form of long distance communication because it is largely decentralized and not dependent on a complex network, or infrastructure in general. This is why ALE has been adopted by governments and militaries that utilize HF. If your interests lie in Emergency/Disaster communications planning, I think it would be in your best interests to familiarize yourself with the HFLink Network, and the commonly accepted ALE standards.